On the evening of February 5, 1918, the lives of more than 2,000 American soldiers were at risk when their troopship, the British steamer Tuscania, was torpedoed by a German submarine in the Irish Sea between the northern coast of Ireland and the Isle of Islay, Scotland.

The United States had only recently entered the Great War and had not yet fully deployed its fighting men to the battlefields of France. Already, more than ten million young men had died in what was widely understood to be the costliest and most savage war in history.

As the Tuscania sank into the water, several of its lifeboats lowered scores of “Doughboys” who nervously rowed into the darkness of the open sea. The whereabouts of the enemy submarine was unknown and it was presumed that one or two other U-boats might still be in the area.

In spite of the danger, three British warships pulled up alongside the stricken Tuscania and undertook a feverish evacuation using heaving lines. Displaying the ancient virtues of courage and devotion to duty, the British pulled off the greatest naval rescue operation of the entire war. Although 39 British crew members were killed in the initial blast, and several soldiers drowned when they fell overboard into the frigid water, the vast majority of the Americans – more than 1,800 – were saved in the nick of time by the destroyers Mosquito, Pigeon, and Grasshopper. 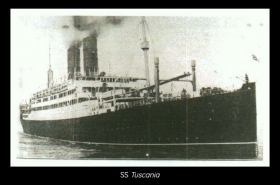 Among the survivors were 21 young men from Baraboo, Wisconsin assigned to the 107th Supply Train of the 32nd “Red Arrow” Division of the U.S. Army. This group of young men would come to be known as the “Baraboo 21.”

“I think in my mind I kept saying, this is a great story,” says Steve Argo, who is also on the Board of Directors of the Sauk County Historical Society.

Because there is no memorial to the Tuscania in the U.S., Argo is working to create one that will be placed at Mary Rountree Evans Park in Baraboo.

“That way the story is preserved, but in a way that’s much more memorable and honorable to the people that were part of it,” says Argo.

The cost to build the memorial is $70,000 and Argo has been working to raise the funds needed. Donations to the project can be made to the Sauk County Historical Society. 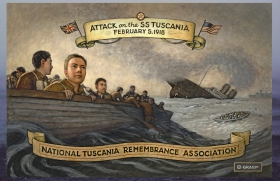 Baraboo artist Homer Daehn is working on what will eventually be a bronze relief that depicts the sinking of the Tuscania.

“The memorial, once it is finished will not only serve to thank the British for saving hundreds of American lives, but sort of remind everyone else to be grateful,” says Argo.

Argo says the goal is to have the memorial completed and be dedicated on Nov. 11, 2018, which will be the 100th anniversary of the end of World War I.

Check out the download on the right of your screen!

You can donate as well! https://www.gofundme.com/tuscania